Last month I had the opportunity to catch a screening of the profound and powerful film “Just Another Girl on the I.R.T.,” marking the film’s 20th anniversary. Even now, 20 years later, the film’s themes remain as strong as ever as it continues to educate, inspire, and enlighten. 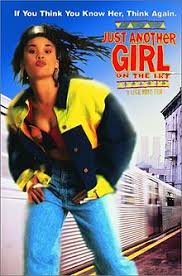 “Just Another Girl on the I.R.T.” tells the story of Chantel Mitchell (played by Ariyan Johnson) as she navigates her senior year of high school. Chantel aspires to be a doctor, and she has the grades and aptitude to achieve it. Unfortunately, Chantel also has a bit of an attitude problem to go along with a foul mouth, much to the chagrin of her teachers. Later in the movie we see Chantel as she meets her new boyfriend at a party, gets pregnant, and undergoes a transformation from hopeful college-bound student, to pregnant teenager trying to grasp her new role as expectant mother, lover, and friend.

What makes “Just Another Girl” different from your classic teenager-gets-pregnant drama, is that Chantel doesn’t fit the stereotype. Here’s a young woman who plans on going to college and becoming a doctor. She has her head on straight and her academic aptitude is never in question. Even after becoming pregnant, Chantel continues to go to school and pursue her dream of going to college. The fact that this story is told through the eyes of a black woman was especially important for director Leslie Harris.

When “Just Another Girl” came out it in 1993, it was released at a time when there seemed to be a heightened interest in urban dramas. Flicks such as “Boys N’ The Hood,” “Menace II Society,” and “Straight Out of Brooklyn,” were captivating media attention and audiences unlike anything seen before. These films often overtly centered around men with women reduced to little more than ancillary roles. “Just Another Girl” broke the mold in not only featuring a black woman as the lead, but by also being directed and produced by a black woman.

In the videos featured below, director Leslie Harris and Ariyan Johnson discuss the impact of “Just Another Girl” and the significance of women of color in cinema and television.

Editors Note: For some reason there are about 10 seconds of audio missing in each video. Not sure why, but I blame the phone for that.