A new article by the Pew Research Center indicates that 2012 was not exactly the best of times for black media, but not all is doom and gloom.

Covering the realm of black media from newspapers to TV, magazines, and the internet, The State of News Media 2013 highlights some downward trends that are being felt in media beyond that just geared towards African Americans.

State of Newspapers and Circulation

Newspapers around the country have seemingly been threatened by lower circulation, decreasing advertisement revenue, and staff cutbacks for the better part of a decade now. The same holds true for many black newspapers as well. The SNM 2013 chart shows 4 out of 5 major black publications saw circulation declines during a six-month period in 2012.

It should come as no surprise that when your circulation begins to dip, so too does the money from advertisers. This in turn often leads to cutbacks/firings affecting the publication’s ability to cover stories in a particular community. The fewer stories that are covered, may mean less people pick up your paper, hence continuing a vicious cycle.

I witnessed firsthand the effects that cutbacks can have on a newsroom. In 2004 and 2006 I had interned at my local newspaper in New Jersey and found out a few years later that they had moved out of the building where they were located because they could no longer afford the costs.

The SNM 2013 report indicates that while there were certainly more cable channels geared towards African Americans in 2012 then in the past, few really offered any news value.

This is significant because the report indicates 69% of African Americans get their news from television. If these channels aren’t showing many news shows, then it’s possible that there may be an opportunity at hand for some of these networks to take advantage of. One such network that has taken advantage of this has been TV One.

On Sunday mornings “Washington Watch,” a show hosted by (soon to be former CNN contributor) Roland Martin looks at the biggest political headlines from an African American perspective. The show has been on TV One since its debut in September of 2009. The best way I could describe it, its sort of like a black version of “Meet the Press,” except on this show there will always be a person of color at the table offering their perspective. I definitely recommend it.

It’s worth noting that BET has also dabbled in the news department. I remember in 2001 watching “BET Nightly News,” which was hosted by Jacque Reed. Then there was “Weekly With Ed Gordon” in 2010. More recently there was “Don’t Sleep!” which was hosted by former CNN anchor T.J. Holmes. “Don’t Sleep!” started off as a half-hour program airing from Monday – Thursday. Then in November it was scaled back to once a week. By December 2012, the show was gone and has yet to return. 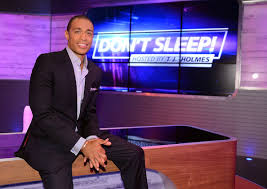 The SNM 2013 also looks into the online spectrum and the reach of sites like HuffPost Blackvoices and The Root have with audiences. Also, it looks into the rise of social media and the importance it holds moving forward in terms of reaching audiences of color.

For the full article and more, check it out here.