It seems Kickstarter is quickly becoming the SOS of many a filmmaker in 2013.

A few weeks ago Spike Lee was the latest filmmaker to enter the fray as he announced he was raising money to fund his current project, a vampire themed flick that he so far has been hesitant to go into much detail about. Spike isn’t the first well known member of the film community to make his pitch for funds on Kickstarter, but the latest in what is an interesting trend.

Earlier this year it came out that Kristen Bell had made a pitch on Kickstarter for a Veronica Mars movie. She ended up raising $5 million. What was most interesting to me at least is that the Veronica Mars movie is being backed by Warner Brothers, who are one of the major players in Hollywood. Ultimately this begs the question of why go to a site like Kickstarter for funding if a major studio is going to be backing the project anyway? Zach Braff (from NBC “Scrubs” fame) also took to Kickstarter and raised more than $3 million for his own project.

I’m assuming Spike Lee heard about the success of these two projects and decided that it was time to throw his hat in the ring. Spike Lee is a very decorated director and his work has often made me think about cinema, specifically as it relates to people of color. “Do The Right Thing” is a classic in my book. “School Daze” was informative and “Malcolm X” was not only educational, but illuminating. “He Got Game” and “25th Hour” with Ed Norton, are also among my favorites. 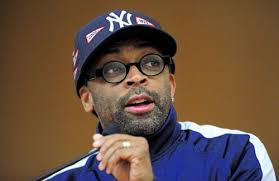 With each passing project, Spike Lee gained more fame, and with it, a larger access to studio funds. That’s not to suggest that the studios are all the sudden welcoming him with open arms, but he’s no longer the outsider he once was when he filmed “She’s Gotta Have It” in 1985. For example, the 2006 thriller “Inside Man,” with Denzel Washington, was backed by Universal Pictures.

So this all brings us back to Spike’s latest film. He has yet to give it a name and when asked what it’s about, he states it involves blood, vampires and lots of naked people. Sounds like either a summertime horror film or a weekend in Vegas gone terribly wrong. What’s troubling though is that not only does he not go into much detail about the film, but he expects people to donate based on his previous work. While I did mention a number of Spike’s films I’m a fan of, I won’t exactly be waving a towel for “She Hate Me” or “Girl 6.”

Yes, Spike is still hustling to get his movies made, but he also has access to far more capital than many of the filmmakers who hitch their financial wagons to Kickstarter do. This is a man with an estimated wealth of nearly $40 million. It also should be noted that Spike has been teaching at NYU’s Tisch School of the Arts, one of the most prestigious film programs in the country (along with one of the most expensive) since 2002. So I must ask why exactly does a man with his previous film credits, along with teaching at one of the country’s most renown film schools, need my money to finance one of his projects?

I have much respect for Spike Lee. I just think in this instance, he’s reachin’ to ask people to donate to a project they barely know anything about. Yes, he’s agreed to take a person out to sit courtside with him at a Knicks game if they donate $10,000 (which is an interesting case when you realize your donating to a man who can afford to pay for his own courtside seats) and that he has other goodies in store for people who give, depending upon the amount. That’s all well and good, but what happens if this movie is a smashing success? Will any of these people see any of the profits? What about if they have a project and need help with funding? Will Spike lend his name on Kickstarter to help their projects? Granted, this isn’t to attack Spike, but you have to wonder if the studios will begin to ask for producers/directors to raise a certain % of a movie’s budget through crowd-funding before they put their weight behind it. Things to think about…