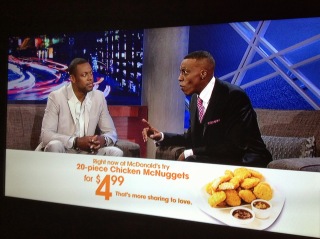 Arsenio Hall made his triumphant return back to late night television this month and the initial results have been promising.

In its first full week on the air, “The Arsenio Hall Show” won the coveted 18-49 TV demographic, which is certainly a good sign. Arsenio has had on a number of well known entertainers and musical guests ranging the gamut from Chris Tucker, to Magic Johnson, to Angela Basset and Kendrick Lamar. I only got see the first show, but I enjoyed it.
I will say this however. If anyone from “The Arsenio Hall Show” happens to be reading this (and just in case you are, I’d love to come visit Los Angeles) it’s not a good look to have ads literally in the middle of a show. As a matter of fact, while ads are common on internet streams and on podcasts (Hello, ESPN) I have never seen ads in the middle of a live show. It just seems jarring, which is why I took a photo of it. Also, it just had to be McDonalds? Maybe it’s just my television that saw this, or perhaps others saw it as well, but please, no more ads in the middle of interviews.