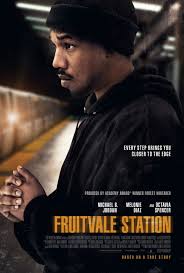 2013 was quite a year for black film. There were more movies featuring black folks in prominent roles then I can remember in quite sometime. Who knows if that continues going into 2014, but we’ll see. With that said, here are my picks:

Movie of the Year: Fruitvale Station

Excellent job by actor-director duo Michael B. Jordan and Ryan Coogler. I remember when the murder of Oscar Grant took place in January 2009 and it affected me deeply. I felt Coogler and Jordan did a damn good job of depicting Grant not as a saint, but as a human being with triumphs and flaws just like everyone else. Though you know the ending going in, it still tugs at your heart to see it all play out in the film

“12 Years A Slave” is not an easy movie to watch, but it is certainly one that is worth watching. Chiwetel Ejiofor gives an Oscar worthy perfromance as Solomon and Lupita Nyong’o deserves consideration as well for her role as Patsey. As for “Lincoln,” Daniel Day-Leiws is just that good. Though “Lincoln” technically came out last year, I wound up seeing it to a packed theater last February.

Listen, I appreciated “The Butler” and I enjoyed the performances of Forest Whitaker, Oprah, David Oyelowo and even the cameos by David Banner and Mariah Carey. The cinematography was very good and the story wasn’t bad; but I still left “The Butler” feeling somewhat disappointed. Certain scenes seemed completely unrealistic – even for film – such as when David Oyelowo’s character, Louis Gaines, goes from marching with Dr. King one moment to sitting at a home in Oakland lounging with the Black Panthers the next. I left feeling that the movie, while good, could have been more.