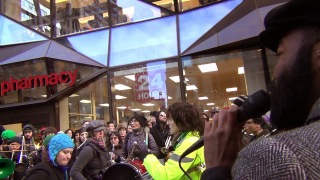 About a week and a half ago, I had the opportunity to film some of the protests taking place in New York City following the deaths of unarmed men Michael Brown and Eric Garner at the hands of law enforcement. It was a powerful experience and one that will stay with me for a long time.

Thousands of people of various races and nationalities came out to protest the deaths of not just Mike Brown and Eric Garner, but the litany of people of color whom throughout the years have been killed by police. I was honestly surprised by the number of white people I saw out at Washington Square Park for this march as it shows that it’s not just black folks who are fed up with this mess. I’ll be including more videos of interviews and other happenings at the protest in the coming days.