Just last month, Dr. Christine Blasey Ford gave public testimony that Brett Kavanaugh — a man who had been nominated to the Supreme Court — had sexually assaulted her when the two of them were teenagers. As astonishing as her testimony was, it wasn’t the first time a woman risked everything to speak out against a man nominated to the highest court in the land.

In the Fall of 1991, Anita Hill came into the public persona when she spoke out against Clarence Thomas, whom was facing his own senate judiciary hearings. Professor Hill, much like Dr. Christine Blasey Ford, would risk her own well being to make sure the world knew of the man whom she claims sexually harassed her years before. In 2016 HBO did a movie entitled Confirmation, which was about the Anita Hill hearings, that starred Kerry Washington as professor Hill and The Wire alum Wendell Pierce, as Clarence Thomas.

In the film we see Anita Hill working as a college professor at the time for the University of Oklahoma. She had worked with Clarence Thomas previously before accepting her position as a professor. She knew the risks involved, but went along with it anyway because she felt it was important for the public to know what she experienced in the workplace under Thomas. She knew her life was about to change, and change it did.

When the initial reports surfaced, media members began showing up to her college campus and her home. Her name was in newspapers and magazines across the country. She received threatening letters and had people publicly questioning her reputation. Despite all this, she gave her testimony anyway.

On the other end of the spectrum was Clarence Thomas. This was the man chosen by then President H.W. Bush to succeed Thurgood Marshall, who himself was the first black person to hold a seat on the Supreme Court. Thomas was portrayed in Confirmation as a man who was very measured (until his testimony) and who had been waiting for this moment for his entire life. We see him in the film with his wife and some brief interactions with this son. When the allegations of sexual harassment hit just days before his confirmation hearing, Thomas seems flabbergasted.

When the actual hearings begin, we see Anita Hill as calm and poised, if but a tad bit nervous, which is understandable considering the circumstances. In front of an all male senate judiciary committee (all white men at that) professor Hill and her team knew they faced an uphill battle. Still, Hill mentioned what she experienced while working with Thomas and the effect it had on her along with why she didn’t speak out sooner for fear of retribution later on down the line.

Clarence Thomas, who wound up going second in the hearings, called Hill’s testimony against him a travesty and a “high tech lynching for uppity blacks.” In the film, the senate judiciary members sit in stunned silence.

What’s interesting as well about these hearings was the impact of television. While not exactly a new medium (TVs had been around since the 1940s) compelling live television like this was still somewhat of a rarity. The concept of reality television didn’t exist yet and the internet in this era was something that was being sent out to people on CD-roms through the mail. Needless to say, television was the dominant medium and the topic of sexual harassment hadn’t received this type of national attention before, certainly not on this stage.

Millions of people saw these hearings and it was the leading topic on the major newscasts of the day. It’s safe to say that sexual harassment within the workplace wasn’t a new issue, but women had never before been given the public forum to discuss such issues at hand. 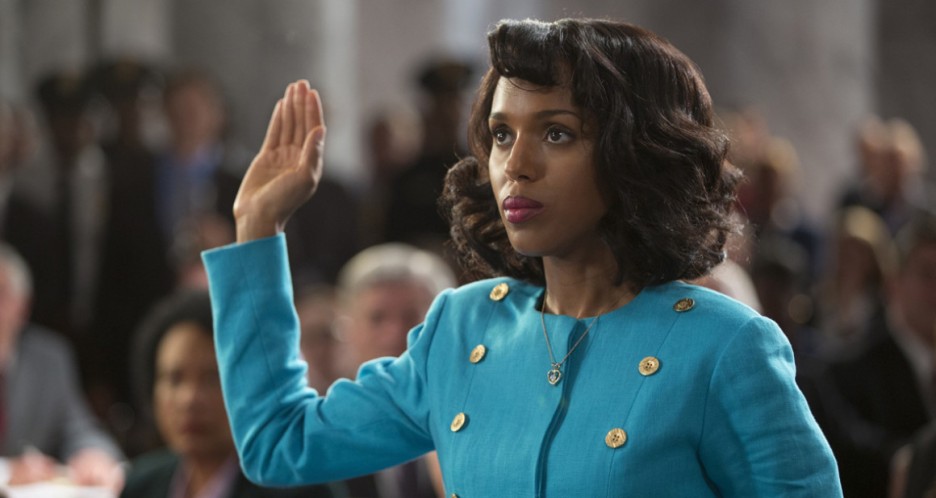 Kerry Washington as Anita Hill in the 2016 HBO Film Confirmation

In the end, Clarence Thomas was confirmed as a Supreme Court Justice on October 15th, 1991. 27 years later, his now colleague, Brett Kavanaugh was confirmed as well. Both men faced serious questions of their character. Both men had women speak to the failings of said character and both men got confirmed anyway.

Anita Hill would return to the University of Oklahoma lauded as a hero and would come back to a flood of support letters from women around the country expressing their gratitude and own stories of harassment. The following year would be known as ‘The Year of The Woman’ as women ran for office and were elected in record numbers up to that point.

For Dr. Christine Blasey Ford, the future is still somewhat murky. She reportedly had to move her family from their home and left her teaching position due to threats made against her. Her words did not fall on deaf ears however, as many were moved to speak out at what they saw was terrible decision to appoint Kavanaugh to the Supreme Court in the face of her testimony. With another national election soon, we’ll see if Dr. Ford’s testimony leads a similar march to the polls in the way that professor Hill’s did more than 25 years ago.