When it comes to the film “12 Years A Slave,” which hit theaters a few weeks ago, my recommendation is to see it while it’s still playing. This article isn’t so much a film review as it is a look at some of the themes at play in “12 Years A Slave” and its larger significance on society beyond the realm of cinema.

I went to see “12 Years A Slave” about a month ago with a lady friend, and at $14 a ticket (Manhattan prices) I was hoping that this film would live up to the all the praise it had been receiving up to its theatrical launch. It certainly did that for me and more as it left me intrigued and analyzing a number of topics upon leaving the theater.

“12 Years A Slave” tells the story of Solomon Northup, a free black man kidnapped and sold into slavery, and the harrowing 12 years of his existence in America’s ‘Peculiar Institution.’ Through his eyes we see the horrors of slavery up close: a mother having her children sold from her arms, brutal beatings, working on the plantation, and a sense of despair festering throughout the film like rotting meat on a summer afternoon. Though “12 Years A Slave” is the story of Solomon Northup, it really could be the story of any enslaved black person at that time. But because the story is specific to Solomon and based on true events, it simply can not be dismissed as an over-dramatization or the imagination of a director like last year’s “Django Unchained.” “12 Years A Slave” gives an unflinching and very hard look at American slavery and quite frankly, it’s a story that needed to be told. 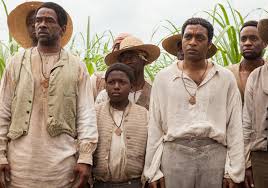 In the last few months I’ve read articles and heard from more than a few people that they’re tired of black people being portrayed in ‘hardship roles’ in films, such as butlers, slaves or having to march and be beaten while fighting for their civil rights. While I understand the sentiment, I think it’s misplaced. While these certainly shouldn’t be the only roles in which we see blacks play major parts, they are nevertheless important to the education of our nation at large.

Slavery is one topic that I feel by and large the United States school system does a pretty terrible job of educating people about. I remember attending an event for the commemoration of the TV miniseries “Roots,” where one of the cast members remarked that when he was in school slavery was reduced to a paragraph in his history textbook. An institution that affected tens of millions of people and lasted for well over 200 years in this nation, reduced to a paragraph. That’s not history, so much as HIS STORY.

The one thing “12 Years A Slave” does exceptionally well is illuminate this dark period of our nation’s history, even if it is but a small glimpse into a past most would like to forget. At a time when national figures are comparing a health system to slavery and a senator from Nevada suggested he would not be opposed to bringing back slavery if his constituents wanted it (yes, a politician in 2013 really did say this) movies like “12 Years” are vitally important. It has become clear through comments such as the ones above, that there are a good amount of people in this country who truly don’t understand just how terrible slavery really was.

Slavery wasn’t simply not having your freedom. It was knowing that your family members could be sold off. It was knowing that you could be beaten to death and that your life had about as much value as cattle. We see this in “12 Years” when Solomon himself barely survives a lynching only because his owner deems him too valuable to be killed. What is interesting is that more of these stories have not been told on the big screen.

Most people have heard of Harriet Tubman. A good amount have probably heard of Fredrick Douglass as well. But what about Denmark Vesey? Nat Turner? Gabriel Prosser? Phyllis Wheatley? These were all prominent names who either spent their lives as slaves or fought tirelessly against it during their time. I was disappointed when Fredrick Douglass was nowhere to be found in “Lincoln,” but not necessarily surprised.

One aspect that “12 Years” did not leave out, was the treatment of slave women during the era. We see a woman who has her children sold, and the audience is introduced to Patsey who is on the same plantation as Solomon. Patsey is beaten, forced to spend backbreaking hours picking cotton and raped. The sad fact is rape of women during slavery was rather pervasive. I suggest people read Harriet Jacobs’s book, Incidents in the Life of A Slave Girl, which details her struggles with slavery and the repeated sexual advances made by her master. These types of relations weren’t just limited to little known slave owners. While it is well known that Thomas Jefferson was guilty of such a crime himself with his lovechild between Salley Hemmings, less is known about George Washington. As it stands, there is presently a black family in the United States who claim to be direct descendants of America’s Founding Father. According to them, Washington impregnated a teenage slave girl by the name of Venus who was owned by a man who was housing Washington at the time. When questioned as to who was father of the child, the girl pointed out George Washington.

So against this backdrop of torture, oppression, and sadness, there is also a sense of great relief for Solomon as his 12 year nightmare does eventually come to an end. However, there is no such relief for Patsey as the audience is left to watch a heart wrenching scene where it becomes apparent that there will be no cavalry for her. Patsey is a person stuck in circumstances she did not create, and subjected to a fate she doesn’t deserve. I believe in the power of films to educate, entertain and enlighten, and while “12 Years A Slave” is not the type of film to see from an entertainment aspect, it certainly does educate and enlighten and give empathy to those who lived under such harsh conditions for such long periods of time.