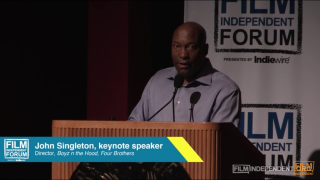 This has been a big weekend for folks from the Los Angeles neighborhood of Compton. The film ” Straight Outta Compton” has grossed nearly $60 million at the box office this weekend exceeding initial expectations. The movie which profiles the rise and influence of members of the world’s most dangerous rap group, N.W.A., has reintroduced people to early West Coast hip-hop. It’s interesting to see where guys like Dr. Dre and Ice Cube are now in their respective careers compared to where they stood 25 years ago. As powerful as N.W.A. was in the early 90s, it wasn’t just the music that was influencing people, but film as well.

In 1991 a young up and coming director had a major splash with the release of his film Boyz in the Hood that told the story of a group of friends trying to make it out of their South Central L.A. neighborhood. They guy who directed that flick was a man by the name of John Singleton. It was Singleton who also gave Ice Cube his first acting gig and it’s something that Cube is grateful for even to this day. Check out the clip below to hear John Singleton talk about Boyz in the Hood and the impact N.W.A. had on him in this 2013 interview on Canadian television.

The Film hits theaters this August.