Well ladies and gentlemen, it’s that time of year again. The news cycles are once again roaring up for another presidential election. I must be honest, nearly three years since Barack Obama’s inauguration, I’m still stunned that a black man is president of these here United States.

Now in the years since Obama’s election, many things have been attributed to his achievement of becoming the first black president. People say he ran a solid campaign. Others say he engaged the youth like few politicians have. Millions were wowed by his great speeches, and some would even say his early adoption of social media was a deciding factor in his election. Being that this blog focuses on film and television, I can’t help but wonder if previous on screen portrayals of black presidents, assisted in Obama’s rise to the White House.

The idea of a black president actually isn’t a new idea at all — at least when it comes to the confines of black actors being portrayed as president. According to Lynn Tolliver’s book, Movie Concepts Sitcom Presentations, the earliest indication of a black man (or in this case, young boy) being portrayed as president, was in the 1933 movie “Rufus Jones for President,” starring a then 7-year-old Sammy Davis Jr.

(Yes, the stereotypes are widely prevalent here, but this was the 1930s after all)


There have been quite a few movies and television series that have had black men leading the nation from such disasters as: death, destruction, terrorism, and even a wayward asteroid.

Tom Lister graduated from stealing bikes in “Friday,” to being depicted as president in a futuristic America in 1997’s “The Fifth Element.”  Morgan Freeman was charged with the responsibility of leading the nation in preparation of an oncoming asteroid the following year in “Deep Impact.”

2003 would bring Chris Rock’s turn at president in his film, “Head of State.” The movie took a humorous look as Mays Gilliam (portrayed by Rock) went from unknown D.C. alderman, to getting his party’s nomination, and running for president. I remember seeing this in early 2004 and thinking it would be awhile before we ever saw a black president, but sure enough, it would only take four more years. 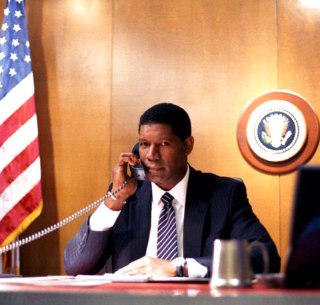 You may not recognize the name, but if I say the phrase, “Are you in good hands?” Haysbert’s picture probably comes to mind. Besides the Allstate ads, Dennis Haysbert  also played President David Palmer on the hit show “24.” He believes that with mainstream America seeing him — a black man — as president, may have very well assuaged the fears some might have had with an actual black man running for the highest office in the land. He said as much in a January 2008 interview to TV Guide magazine:

“As far as the public is concerned, it did open up their minds and their hearts a little bit to the notion that if the right man came along… that a black man could be president of the United States,” says Haysbert.

I tend to agree with Haysbert to a certain extent on this. I think his portrayal as a strong, decisive president, may have very well subconsciously opened up people’s eyes to a person of color holding the highest office in the land. An even more interesting question since the election of Barack Obama is will we see more men of color playing president in movies and TV? How a bout a black female as president? Things to think about…