Here in the United States, people were obsessing about an eclipse that could be viewed by millions throughout the country. Apparently this was possible for the first time since the 1970s. The eclipse was treated with a lighthearted celebratory fare, with the only concern being people not look directly into the sun for fear of damaging their eyes. Not everyone got the message however. It was on this day though, 186 years ago, that an eclipse proved to be a harbinger of one of the most storied rebellions in American history. 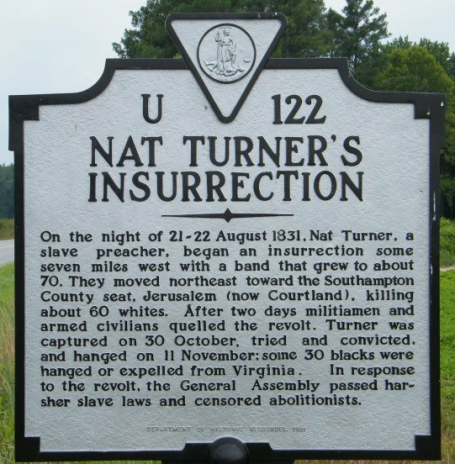 August 21st 1831 was the first day of Nat Turner’s rebellion in Southampton County, Virginia. Turner, who was born a slave and later became a preacher, was a deeply religious man who had been looking for a sign from God to overthrow his masters. In February of 1831, Turner believed he had gotten his sign. For it was that month that he witnessed a solar eclipse and interpreted it as approval from God to begin his insurrection. Six months later, his rebellion was launched.

Nat Turner’s rebellion resulted in the deaths of approximately 50 whites and dozens of blacks throughout the South. Turner was subsequently hanged and the state of Virginia clamped down on allowing slaves to learn how to read and write, let alone being able to attain their freedom. This chapter in history was recently made into a film entitled “The Birth of A Nation,” which was written, directed, and starred Nate Parker as Turner himself.

I actually saw “The Birth of Nation” just a few weeks ago and the cinematography and use of color is stunning. Seeing that film only begins to give one an insight into just how cruel and inhumane the institution of slavery was. To know that your watching depictions of real people and real places made me all the more appreciative of those who came before me in the fight for freedom. “The Birth of A Nation” is currently playing on HBO and HBO Now and can be found on streaming services and Blu-Ray.