It’s safe to say that with just under a week to go until it’s theatrical premiere, Marvel’s newest film Black Panther, is already a cultural phenomenon.

The film debuted last month in Los Angeles for it’s first official screening and the red carpet looked very different than what one would see at these types of events. Folks dressed in beautiful African garb and a who’s who of Black Hollywood, showed up in addition to the cast and crew for Black Panther. From that moment, the effervescent reviews have been flowing.

Black Panther is a cultural landmark not just for audiences, but also for the film’s parent studio — Marvel. As the the 18th movie in Marvel’s ever expanding cinematic empire, it’s the first film to feature a majority black cast. With Chadwick Boseman as Black Panther himself and featuring Lupita Nyong’o, Daniel Kaluuya, and Micheal B. Jordan, the film encompasses some of the leading young black actors of today. Not to mention it’s directed by Ryan Coogler (this is his and Micheal B. Jordan’s third film together) the film certainly has many people excited.

Black Panther comes at an interesting time for Marvel. For 2018 marks the 10 year anniversary of Marvel’s first picture that ignited the studio’s resurgence: Iron Man. Since then, the studio has earned more than $12 billion dollars from it’s films as of 2017. Things weren’t always so lucrative however. As of matter fact, in the mid 90s Marvel the brand was nearly bankrupt and theatrical success for its comic book characters seemed little more than a pipe-dream at the time. That was until a gun-wielding vampire slayer showed up onscreen and ignited a sleeping giant.

When Blade debuted in 1998, Wesley Snipes was still a megastar. From New Jack City to White Men Can’t Jump to Passenger 57 and Money Train (OK, maybe not Money Train), Snipes had established himself as one of Hollywood’s more bankable stars during the 1990s. After a fair amount of success, Snipes wanted to make a film based of the comic book character Black Panther. Unfortunately for Snipes, the timing just simply wasn’t right. 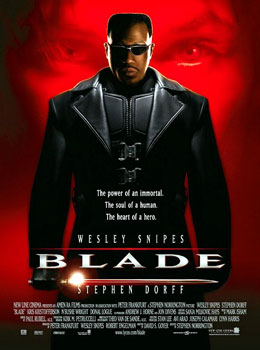 “I think Black Panther spoke to me because he was noble, and he was the antithesis of the stereotypes presented and portrayed about Africans, African history and the great kingdoms of Africa,” Snipes said recently in an interview to The Hollywood Reporter. Snipes also mentions that although he had the blessing of Stan Lee at the time to make the film, they couldn’t get the right screenwriters and a director who shared the same vision as Snipes.

“We went through three different scripts and couple of different director options,” Snipes says in the interview. But where Black Panther failed to launch, that opened the door for Blade and the rest is history as they say. “They both [Black Panther and Blade] had nobility. They were fighters. So I thought, hey, we can’t do the King of Wakanda… and the hidden kingdom in Africa, let’s do a black Vampire.”

Blade would make more than $100 million at the box office and spawn two more films for the franchise. As successful as it was however, there were other black superheroes during the decade who were leaving their mark as well.

In 1993 MGM’s The Meteor Man starred Robert Townsend as a D.C. school teacher just trying to do good until he’s hit by a meteor one day and wakes up with super powers. Though a light-hearted comedy, the film did touch on issues regarding gangs and the drug trade. What’s also interesting about this film is that Townsend’s character never wears a mask, and hence, everybody knows who he is.

There was Daman Wayans in Blankman in 1994 and also Micheal Jai White’s Spawn in 1997. Even Shaq got in on the act during this era with his movie Steel that also starred a young Ray J, who himself would go on to make very different films a decade later.

Fast forwarding back to today, what these films show is that black superheroes aren’t exactly a new thing, but that there has been some time since they’ve had their due. It’s self affirming to see people who look like you onscreen and even better when they’re kicking ass and taking names.

Films like Black Panther help to open up the comic genre movie-going experience for more audiences. Knowing that a film like this has been in the works for over 20 years and is finally coming to fruition, is an achievement not only of the cast and crew, but for those pushing all these years for a day like this.