Athletes speaking out about social issues isn’t exactly a new thing, but the way today’s players are using their platforms to express their views against a sitting president is anything but routine.

Case in point are the comments NBA stars Lebron James and Kevin Durant had to say in a recent interview regarding President Trump and his leadership — or lack there of.

The comments were featured in a 16 minute video on Lebron’s media site Uniterrupted. The video is done in partnership with the ride-sharing company Uber, and features Espn’s Cari Champion playing the role of chauffeur/interviewer while asking guests in the back seat a series of questions regarding their career on and off the court. There have been two other videos I know of thus far featuring Paul Pierce and Lakers rookie Lonzo Ball, with Ms. Champion being the driver in both instances. These videos give the viewer a somewhat more intimate look at today’s athletes thoughts and answers to challenges they face on and off the court.

On this particular ride, Ms. Champion had the opportunity to interview two of the NBA’s biggest stars for a somewhat unfiltered discussion on sports, politics, influence, and what drives them not just as athletes — but as men. The ride takes place in Lebron’s hometown of Akron, Ohio and features pit stops at the places that influenced him growing up.

During the ride a number of topics are discussed regarding money, influence, growing up and social responsibility. It’s enlightening to hear these two talk about things outside of basketball and give the audience some insight into what fuels them beyond the 94 feet of NBA hardwood.

One of the more interesting segments were each man’s thoughts on president Trump when prompted by a question by Cari Champion. Lebron came out and laid it right on the table when he said that Trump, “doesn’t give a fuck about the people.” Meanwhile, Durant added that the president should be showing more leadership and empowering people. Instead, according to Durant, Trump was doing just the opposite and running America like a “bad coach.”

These comments in of themselves aren’t all that noteworthy, but the mouths through which they were uttered, certainly are. The NBA — perhaps more than any other league –has been rather outspoken on number 45 and his policies. The fact that Durant and Lebron are speaking out, being the league’s two best players, only strengthen’s the NBA’s position as the league most likely to stand up to Trump. 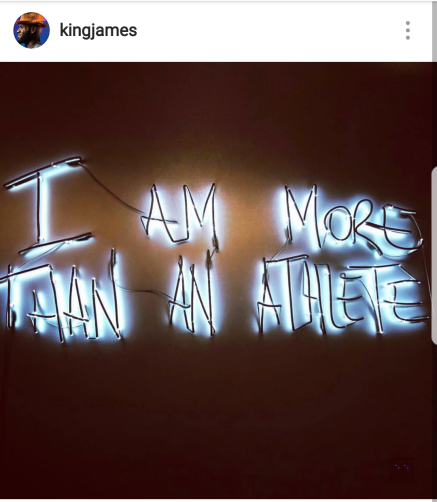 Suffice to say, there were some not too happy with Lebron and KD’s words. Laura Ingraham of Fox News, called them two “dumb jocks,” “barely intelligible,” and that they should just “shut up and dribble.” In Ingram’s view, she doesn’t believe athletes should have a voice, let alone speak out against a president her employer just can’t stop fawning over.

What’s interesting is that Fox News has had plenty of entertainers and sports figures on their airwaves freely discussing issues and topics beyond their realm of expertise. Philadelphia Eagles player Chris Long, created quite the Twitter story of Fox’s hypocrisy of athletes and entertainers speaking out.

When asked about host Laura Ingraham’s comments during NBA All-Star weekend, Lebron James responded, “we will definitely not shut up and dribble. I will not do that.”

There has been a long history of black athletes speaking out in America. From Jackie Robinson, to Muhammad Ali, Jim Brown, Bill Russell, Althea Gibson and others, many of them understood that their talents gave them a platform. That platform, in turn, gave them an opportunity to speak out on issues affecting millions of lives in the communities in which they grew up in, many of whom could only dream of such an audience. Even the notoriously quiet Michael Jordan has in recent years opened up.

With the ever evolving prevalence of video and social media, it’s never been easier for today’s athletes and superstars to lend their voice. With millions of followers and watchers around the world, it’d be foolish to expect them to just “shut and dribble,” without taking note of the world around them.